It’s common knowledge that most African or black women until the 2000’s carried relaxed hair with the most common reason for their choice being it was what they knew, for easy management and because natural coily hair was not accepted as an appropriate hairstyle for the work place, in some industries e. g entertainment and fashion, not tidy enough to be carried to school and not fashionable enough for formal events.

The other popular hairstyle amongst black women and especially girls was corn rows in its various forms especially with extensions added, sew in weaves and single braids using synthetic extensions.

Relaxed hair or permed hair as it is commonly called was the most fashionable and accepted form of carrying black hair amongst adult black women and this process involved the use of a sodium hydroxide based cream which breaks the bonds of coily hair within a short time giving the desired straight silky hair look.

In a lot of cases, these services were carried out by artisan hair dressers with little professional knowledge of how the hair should be prepared or handled before a relaxer application. This ended up causing immediate to slow damage to the scalps of these women. (that’s for those who were lucky to leave the hairdressers chair without red, open and painful burns from having the relaxer stay on too long or even applied to bruised scalps or on sore scalps immediately after taking down a braided hairstyle).

Now many years down the line since the days when relaxed hair was the rave, the fuss over carrying sleeked down braids with as little hair visible around the edges as possible and partings straight and shiny like the tarred roads of the urban cities, more knowledge of living healthier lifestyles and awareness of the risk of being exposed to cancer have become issues of the past totally taken over by the sheer confidence to wear their natural coils in their exotic patterns.

For shame of being laughed at or stigmatized a lot of women have concealed the effect of the hair loss they suffered mostly from those bad hair days under wigs and only speak up after scarring has progressed or a lot of the hair follicles dead before seeking help from professionals.

In such situations, the first line of action should be to identify and stop the initial cause of the hair loss. Given the examples above:

Stop the use of RELAXERS as these have been proven to cause chemical burns especially if not done by a professional hair stylist. People who have fine hair are usually at greater risk of burns because their hair process very fast but if the process is not watched closely, then they could encounter burns which could lead to permanent scarring and hair loss.   Another effect of relaxers which cause hair loss is due to the straightening effect which is basically what makes it popular and desirable by breaking down the disulfide bonds in hair (which is the structure that gives healthy hair its strength) once these bonds are lost, the hair becomes prone to breakage from the dryness and weakening which causes loss of length especially coupled with friction from styling or lifestyle choices. To achieve the straight sleek look, the relaxer has to weaken the hair strands.  Apart from the effect on the scalp and hair, there have been studies that black women are at higher risk of breast cancer from long term use of cream relaxers because they contain ingredients which could be endocrine disruptors when absorbed into the body through the scalp or broken skin.

The second major cause of hair loss in black women is tension which also means tightness on the scalp especially from poor styling and is commonly referred to as TRACTION ALOPECIA. This condition is caused by trauma to the hair follicles and affected scalp area and usually presents in either redness, boils, tenderness and even obvious pulled follicles.  These poor styling choices are usually made in the name of protective styles but clearly serve to the contrary range from tightly made weave sew-in tracks believed to enhance the final look, sleeked corn rows especially on natural hair using extensions believed to make the look last longer or locs that were made too thin and tight ponytails with heavy accessories to finish the look.

The best way to treat traction alopecia will be to build a simple regimen for your haircare comprising of a good cleansing shampoo, moisturizing conditioners a nourishing seal for the hair shaft and an effective anti inflammatory , restorative scalp oil.

Secondly staying away from tight hairstyles, if it feels tight or uncomfortable then ask for the grip to be loosened. Hair should be shampoo 7-10 days a stretch while protective styles should not be kept in for long stretches if not they trap dirt, sweat and product build up which could easily cause inflammation.

The Place of a healthy diet is paramount in haircare and largely over looked sadly. Green leafy vegetables, legumes, lean protein, seeds and nuts, fruits and wholegrain carbohydrates help to ensure a healthy body and a healthy scalp. 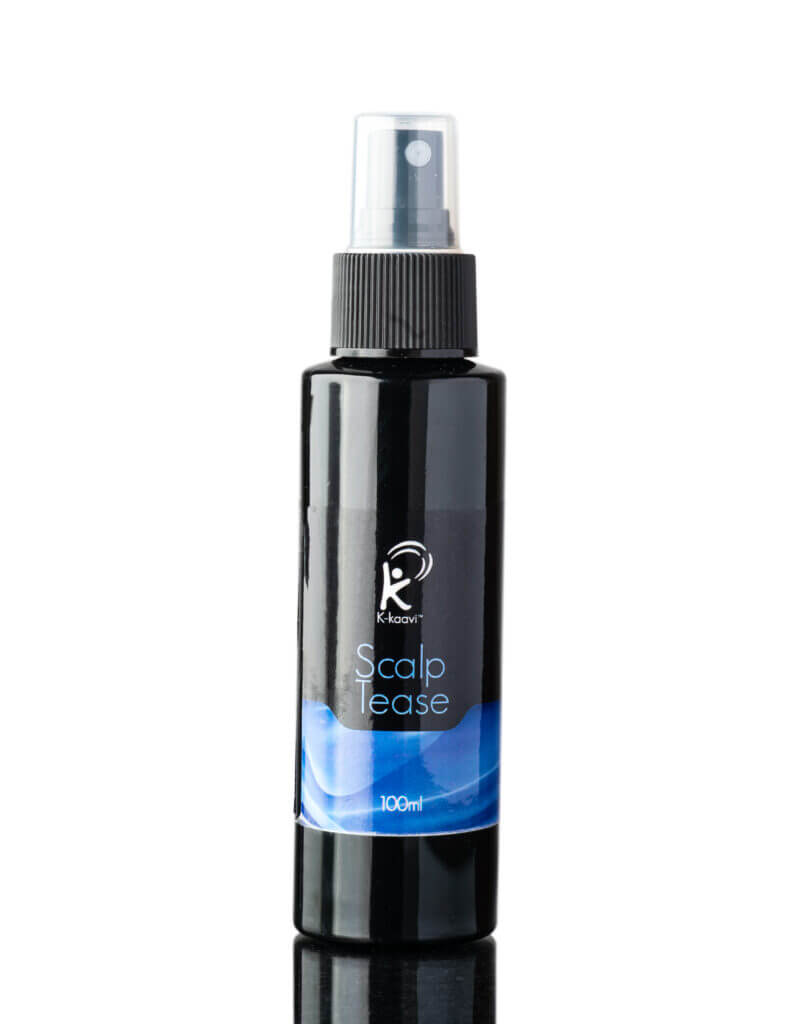 With Kkaavi Scalp Tease oil can help you in the treatment of traction alopecia.